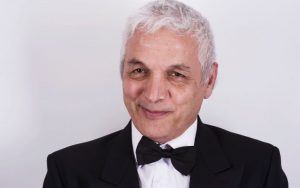 Joseph Hossein Karimbeik was born in Tehran, Iran, as the son of the working-class Iranian parents Alamtag Ghandehary and Yadolah Karimbeik, a shoemaker. He was brought up in Tehran finished his high school at Darolfonon and immigrated to the UK in 1975 and auditioned for drama school and ultimately being accepted by the London drama centre where he graduated as director in1980. Then in 1986 he immigrated to the States and became a naturalized U.S. citizen.

Karimbeik is best known for portraying the character Raschid in Mona Lisa (1986), Colonel Hassan Ali in Half Moon Street (1986), Hossein in Brothers (2004) and Lugash secret policeman in Curse of the Pink Panther (1983), as well as television series like the Cold Warrior (1984).

In 2015 Karimbeik left his theatre and acting career behind in order to pursue his career in film directing.